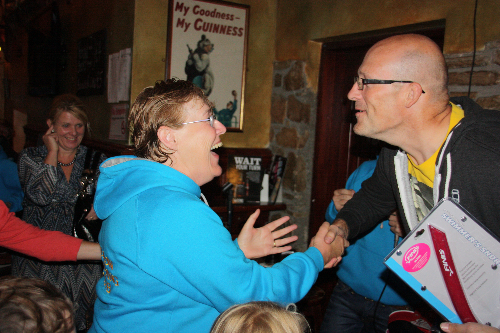 Saturday 31st August seen one hundred and thirty nine swimmers, from all over Leinster, take part in a 1.8k Ladies & Gents open sea swim for the Healy/O’Kane Cups.  First home in the men’s race was Frank Carroll from Glenalbyn Masters, 2nd Billy Kehoe, Sandycove and 3rd Aidan Robertson from Pheonix. In the Ladies race Lisa Howley  from Glenalbyn Masters was first, 2nd Anne McAdam, Phoenix and third was Ann Marie Kenrick from Pheonix.  Food and refreshments were served in “Phils” along with presentation. Sponsors Pat O’Kane and Mrs. Healy were there along with the extended O’Kane and Healy families. Wicklow Swimming club would like to sincerely thank the Healy/O’Kane families for their many years of kind sponsorship.

The “Last Splash” was on Sunday 1st September.  The racing started with the junior sprints and Challenge (Results to follow)The Intermediate’s raced for the Captains Cup in a sealed handicap over a course of 450 metres. 1st Ciara Brennan, 2nd Ken O’Grady, 3rd Aoife Farrell. In the Youths race Aisling Garland was first home, followed by Madb O’Keane in second place  and Callum Rae was third. Seventy two senior swimmers took part in the “Lighthouse” race for the “McAuly Shield”, which is kindly sponsored by the McAuly family. 1st Martin “Buddy” Kinsella, 2nd Cliona Byrne 3rd Jan-Ove Kristiansen.

The Junior/intermediate/Youth presentation night was held in the Grand Hotel on Friday 6th September.  The juniors were all presented with their League medals, for each of the three months of the season. The Intermediate Individual league, was won by Niamh Fitzpatrick with 125 points, 2nd Alexandra Spencer (116 pts), 3rd Ciara brennan (114.5 pts), 4th Laura Whitty (114 pts), 5t Conor Brennan (110pts), kindly sponsored by Olwen Bond. The Fastest Time League was won by Luke Corcoran, 2nd Laura Whitty, and 3rd Alexandra Spencer. The winners of the Intermediate Team League 2013 were Aoife Marie Sheekey capt, Alexandra Spencer, Laura Whitty, Dylan O’Donnovan, Megan Rae, Aoife Farrell . The Intermediate club persons of the year is kindly sponsored by Catherine Byrne, who is a long time member and ex-president of the club. Catherine very rarely misses a race and this year she picked Aoife Marie Sheeky and Luke Corcoran as the Intermediate Girls and Boys Club club person of the year. The Youths league was won by Nicole Humby, with the Youths fastest Time league being won by Hanna Blake. The Youth Swimmer of the Year was awarded to Oisin Nolan who is the junior captain this year.

The committee would like to say; congratulations to all of the young swimmers of the club, who have had a fantastic year of swimming. The committee would also like to thank all the Mums & Dads and all of the people who are down early on a Sunday morning to help run the races. This year has been fantastic for the swimming club, with great weather and a record number of swimmers, old and young taking part in events. None of which would be possible without the help of the dozens of volunteers who help organize the races over the summer and the training over the winter, a big thank you to everyone concerned.